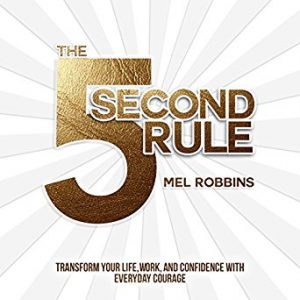 Right now you have something you need to do, that you’re avoiding…

Maybe you’re procrastinating.  Maybe you’re just not bringing yourself to do it, even though you really want to.

And it’s not just this thing.  It’s a thousand little things this week.  It’s when you should’ve rolled out of bed, but you hit snooze instead.  It’s when you wanted to speak up in a conversation, but you didn’t.  It’s that email you’ve been meaning to send.  It’s the actual act of sitting down, putting your fingers on the keyboard, and starting to write.

You know what?  You’re not alone.  Everyone else who reads this will nod silently, a little disappointed in themselves, because I speak a painful truth.

It hurts to admit it, but I’ve struggled to get up and moving too many times recently.  I’m not always Johnny-on-the-spot starting writing when I know I should.

The other day, I even woke up and went to my office with the intention of doing kettlebell and meditating…  Only to spend 45 minutes NOT doing that, and reading Google News on my phone instead.

We all do it.  We all do the easy thing, instead of the important thing.  We put off what’s impactful for what’s immediate and urgent.

Even though we know better.

Even though we want to be doing the right thing.

Even though we will ourselves and have every intention of taking the action that would move us forward.

I’ll get to it in a minute.  But first, another story.

When I was young, my parents took me on a trip to the Space Coast, in Florida.  Between the Kennedy Space Center and Cape Canaveral Air Force Station, every manned US spaceflight from 1961 through the end of the space shuttle program in 2011 launched from the area.

And when I was around 10, my parents took me to see one of those launches.

Now, if you’re an astronaut blasting off into space, there’s no way to deny what you’re doing is dangerous.

The US space program’s history is chock-full of deadly disasters.  Apollo 1 caught fire on the launchpad, and all three crew members lost their lives.  A pile of other accidents claimed one or more lives.  The world was watching in 1986 — just a few years before I was there — when the Challenger disintegrated during launch, taking the lives of all seven astronauts on board.  In 2003, we had another disaster, when the Columbia burned up on reentry, again taking seven astronauts’ lives.

So imagine with me for a minute that you’re an astronaut, about to blast off into outer space.

Now imagine if the spacecraft you’d be taking off in were like your car.  Where you had a key, you put it in the ignition, and you turned it over to start the vehicle.  All on your own.  All based on willpower.

My guess is you’d procrastinate.

You’d think of all the astronauts who’d lost their lives, doing the same thing.  You’d think of how dangerous it was to do what you’re about to do.  You’d have a million other thoughts about all the reasons you should NOT do it.

But that’s not how space launches work.  Instead, there’s an ignition time.  There’s a countdown clock that’s running for days preceding the launch.  And there are specific action items that must be completed by certain milestones, up until and even beyond the moment of launch.

And when the timer is counting down, you don’t have a choice.

And if you’re there watching — as I was — you see and hear all of this happening.  The countdown is broadcast through the loudspeakers.  Then when there’s ignition, you see it happen.

All based on the countdown.

That little countdown literally gets those astronauts through a point where every cell of their body is likely screaming NO, where their lives are literally on the line, and it pushes them to do the impossible.

If a countdown launched humans to the moon, what could it do for you?

I recently picked up The 5-Second Rule, from Mel Robbins.  It kept staring at me from the bestseller lists.  And there was a certain intrigue.

On one hand, I could tell it was the kind of book that you didn’t need to read, because its message was quite literally in its title.  (Like Donny Deutsch’s Often Wrong, Never in Doubt.)

On the other hand, it had a ton of good reviews.  So I figured I’d check it out.

First, because the rule is sound.  Most of us don’t live up to our potential.  And most often, the reason why we don’t live up to our potential is because we don’t act when we could.  Instead, we deliberate for too long, and the opportunities pass us by.  This can be as little as getting up earlier to hit the gym, or talking to a stranger who intrigues us, or as big as asking for a raise or quitting our job to pursue a new career.  Counting down from five to one and taking a physical action step toward your goal is a quick and easy way to beat inaction, and it works.

Second, because Mel Robbins is a great copywriter.  Even though she claims not to be a writer, and is a public speaker instead, she gets persuasion.  The audiobook sounds like it wasn’t written.  Which probably means she spoke it, transcribed it, edited the heck out of it, filled in gaps, then read it again for the audiobook.  It’s natural and conversational like the best prose.  And, she does an incredible job, in that context, of presenting complex research supporting her rule in an aww shucks way that sneaks under the radar.

Third, because it’s inspirational in getting you to apply the rule.  That’s the whole point of it being a book, instead of a 2-sentence instruction.  You hear example after example about how creating a bias towards and a habit of action can change your life.  In the tiniest and most gigantic ways.

What action?  Whatever it is that you want to do, but are not doing.

You know the thing.

And then, turn it into a habit.  Use it to get out of bed when your alarm goes off.  Use it to start conversations with interesting people.  Use it to ask for things, at work and in your personal life.  Use it to make sure you’re telling people you love how important they are to you.

Because when you do, those 5 seconds can change your life…

Earlier this week I told you my wife and I went to see Hamilton for our wedding anniversary.

A couple years’ back, we decided to go skydiving as an anniversary thing.

It was tandem — the only way to jump safely for your first time.  And we were in a plane that took us up to 12,000 feet for the jump.

There were maybe two dozen jumpers in the plane, lined up on benches in the back.  Some were tandem, others solo (it was part of a big event going on for the weekend).

When we got to altitude, they opened the jump door.

We’d received specific instructions.  They start at the front of the plane, nearest the door, and everybody jumps in quick succession, in order.  If you don’t jump in pretty quick succession, you end up too far away from where you’re supposed to land, which is not a great way to start your jump.

So when it’s your turn, you slide to the door, grab the outside of the plane’s fuselage, and start rocking toward the door.

Now, as a tandem jumper, you don’t have much control over what happens when you get to jump.  The experienced jumper strapped onto your back pushes you out the door whether you’re hesitating or not.

But if you’re paying attention, you’ll notice something.

Whether you’re counting from 3 or 5, the rule is the same.

A quick countdown.  Then take that scary action.

Afterward, my best description when asked if I was scared was, “I didn’t have time to get scared.  We just counted down from three and did it.”

And now I’m one of those people who’ve jumped out of a plane.

And yeah, it was fun.

But little did I know until The 5-Second Rule just how much was at work in that little countdown that made it all start before I could get scared.

And little did I realize until the last few days just how much more I could accomplish if I used those countdowns far more often.