This is Part II in my series on The Anatomy of Viral Business Content.  (Click here for Part I — and subscribe to get the whole series!)

We’re looking at lessons learned from my first “viral” post on Breakthrough Marketing Secrets, “My response to a copywriter looking for career advice.”

And how YOU can use these lessons to…

“Any response that includes Eminem is just fine by me.”

Let’s see if we can find any more gems from the controversial Slim Shady, that we can use to pull marketing and business advice from…

I told you today’s lesson was going to be all about controversy, so you KNOW there’s going to be some gems from Eminem there.

But what you may not realize is how much of Eminem’s controversial image is MARKETING.

Because Eminem is the second-best selling male artist since Nielsen Sound Scan starting tracking all album sales in 1991!

Among all artists including groups he’s #7!

And, conveniently, in his song Rap God, he shared his “blueprint…”

“Everybody want the key and the secret to rap immortality like I have got / Well, to be truthful the blueprint’s simply rage and youthful exuberance / Everybody loves to root for a nuisance / hit the Earth like an asteroid / did nothing but shoot for the Moon since.”

“Now this looks like a job for me / So everybody just follow me / Cause we need a little controversy / Cause it feels so empty without me.”

Most of Eminem’s success — media exposure, fan engagement, album sales, attention, etc. — came because of the controversy he created.

This is a lesson.

If you want to be talked about by your market, one surefire way is to create controversy!

Do you have to be Eminem to create viral business content (or quote him)?

But you should take a lesson and anytime you find yourself playing it safe, stir it up. 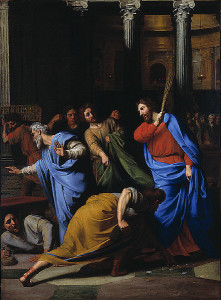 “If this doesn’t make my teaching go viral, I don’t know what will!”

Even Jesus walked into the temple, threw everybody out, and flipped over the tables of the money changers.

Stir it up if you want to make an impact!  Don’t be afraid of the controversy you create, embrace it.

Some people won’t like you stirring things up.  They feel uncomfortable with people who go out of step from the status quo.

(Often they’re the ones who benefit most from the status quo being what it is.)

And so they’ll try to push you back in line…

So when I published my letter to the copywriter, Martha (*name changed to protect the guilty!) in particular had some pretty negative feedback…

She said, “You sound conceited, not caring…”

Then she threw the book at me!

(I’m not going to quote her here, because I think she might take me to copyright court over theft of her comments!  Okay, maybe not.  She and I have actually continued the conversation and reached some level of mutual respect.)

Anyway, I was actually a little happy I’d stirred up at least one strong negative response.

It gave me the opportunity for another response, and another blog post!

Here’s what I told her…

Martha, gray hairs do not experience make. And remember, he was coming to me, based on my reputation. I hadn’t solicited this interaction.

Yeah, I thought of publishing it as I wrote it. It was my time. It was free advice. I own my words. I can use them as I like.

The fact is (and I wrote this in the context part of the post) is that this guy had contacted me three separate times, and each time I’d spent roughly 45 minutes providing a kind, thorough reply to his questions about being successful as a copywriter. He’d done little-to-no implementing of my previous advice. (As often comes with even SOLICITED free advice.)

And so I asked him, if he wanted to keep getting advice, to pay for it. So he would take it seriously.

I too have benefited from mentors spending tremendous time with me. But there has ALWAYS been something in it for them.

Most often, it’s mentors who I’ve worked directly under. The better I am at my job, the more money they make and success they enjoy.

Sometimes, I’ve interviewed people and shared the recordings publicly. I didn’t pay them, but there was certainly a “What’s in it for me?” on their side of the equation, because of the presence I was creating for them in the market.

And I’ve paid for coaching and consulting as well.

I could go on, but the truth is when I look at ANY mentor relationship I have that’s had any length or depth to it, I only have to look one or two layers deep to see how the mentor benefited as well.

And, in fact, I offered no-dollar-cost mentorship as part of this as well… I only asked that I could record and share it for the help of others. He declined.

What I want to teach my children is that if advice is worth asking for, it’s worth paying for as well. Not necessarily in monetary terms, but in some sort of exchange of value. I don’t want to raise my kids to expect and expect and expect someone to provide ongoing coaching, counseling, or mentorship without putting the other person first. That’s exactly the message I gave him that email, too. Don’t think about how you can get six figures as a copywriter, think about how you can EARN it. And I gave a specific equation that puts clients first.

And because I run a business and not a nonprofit, any time I donate to random folks who email me asking for advice is taking away from time I should be spending putting food on the table for my family, and putting a roof over their heads. Why shouldn’t he pay me for that time?

The reality is that I do admire folks with the gumption to stand up and ask for what they want. But I admire it even more when they (and I include myself in this) put the other person first in the request… “I want to do you a favor, with the hope that you’ll return it.”

And when someone doesn’t understand that, responding like a stern parent would does NOT show a lack of empathy. It’s just a higher level of empathy that recognizes when nice will no longer get the person the results they want. When one of my kids is about to stick their hand on a hot burner, a stern yell of “STOP” is the best empathy possible. I think this situation is much the same.

I was giving him the absolute best advice I could about how to succeed as a direct response copywriter — based on my experience doing the same — which is what he was asking for… And he ended up getting it free — while I got a blog post.

But you obviously get to decide for yourself how conceited and unethical I am. Another Eminem quote that stuck with me… “I am whatever you say I am, if I wasn’t, then why would you say I am?”

I think there’s a lot of important principles coming up in these discussions. I appreciate all the positive and negative comments and the opportunity they present to engage in conversation around these issues.

So there you have it.  My response to the controversy I’d created.

Which leads to another point…

Eminem might get away with controversy for controversy’s sake…  But you won’t!

This is critical if you want to use controversy in an attempt to create viral content.  Just being controversial may sell records.  But it doesn’t sell products and services.

You have to work valuable information and advice in between the controversy.  Notice my response to Martha was nearly 100% focused on value creation and delivery.  And frankly, my first post was as well.

But done it in a very direct, no-excuses way that essentially told the guy he’d have to earn his success.

So now you know, you’re more likely to create viral content for your business if you adopt a BOLD VOICE and EMBRACE CONTROVERSY…

Leave me a comment on the blog with what you think.  Have YOU had success by being controversial in your market?

Which will have a HUGE impact on its success.

Thanks! Check your email to confirm & grab your free goodies...